There is a formula that goes into white victimhood that I’d like to take a few moments to explain. Let me get right into the formula. Step One is to start shit. Step Two is to play victim when the person you started shit with retaliates. It’s so important to understand white victimhood in the current times we’re now living in. It’s absolutely everywhere these days, from the police departments to the president of the United States. Nearly all of them are following this 2 step formula of white victimhood to a tee.

Here is an example of white victimhood that I came across one night while surfing YouTube. 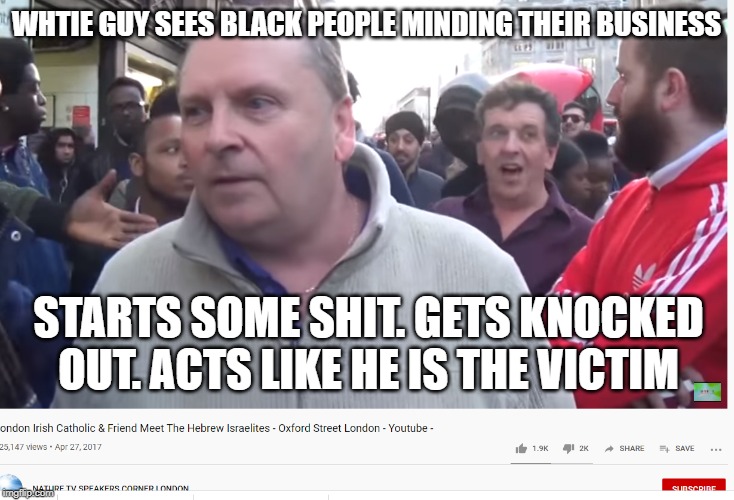 (*update : this video can now only be seen on youTube. Their ’embed’ is disabled.)

Whether or not you agree with the religious beliefs of Black Israelite’s, they are minding their own business. Standing on a street corner, preaching their gospel the way they see it. While this is a video I am sharing what unfolds happens in nearly all the videos I’ve seen. White people, walking by decide to involve themselves in their conversation. That’s Step one, Start some shit. Then when the black Israelites respond (Step two), they go directly into white victimhood. The formula plays out time, and time again in most videos I’ve seen.

You may have noticed this happening as well, if you’ve also watched enough of their videos!

There was a white guy attacking Tariq Nasheed on Twitter, which happens often to outspoken blacks on twitter. While minding their own business, speaking publicly they are trolled by whites who don’t want them to speak or share ideas.  It’s this same pattern in play, and you’ll notice how they justify their actions of Step One: Starting Shit.

A street preacher isn't 'minding their own business'. They are trying to influence others. You know that was in UK

They feel threatened by ideas?

Most recently, we have yet another police officer involved shooting where white victimhood was on full display.  A few months back, we all witnessed the cold blooded murder of Terrence Crutcher at the hands of Betty Shelby.  She claimed that she felt threatened by this big scary black man, who had his hands up as he walked away from her. Naturally because she was so afraid of him, she Had no choice but to murder him by shooting him multiple times.

She and other white police officers started shit when they pulled their guns on him. Then based on his response, being afraid and backing away from them, they used that as an ‘excuse’ for shoot to kill.

This was Darren Wilson’s excuse to murder Mike Brown. He was afraid for his life, even though witness recounts officer Wilson provoked the entire encounter.

George Zimmerman (who is half white and we can all tell does not identify as Hispanic) used this same formula when he murdered Trayvon Martin. He claims he shot Trayvon in self defense, because after he ignored 911 dispatchers who told him not to pursue Trayvon, he started some shit. Then when Trayvon responded to that shit he started, he used it as an excuse to be a victim knowing his white friends at the Police department would understand.

Afterall, he’s not living his life as a Hispanic but as a white person.

Cooning or selling out isn’t something mutually exclusive to the black community.  When you identify as white, one of the key things you do is mimic the behavior of white culture. This formula of white victimhood must be learned at home, because it’s so common.  Those wishing to ‘get in good’ will use this victimhood method themselves. Several sell outs who’ve been taken to task by the black community, pretend not to understand why. They do this, in hopes that white people will feel sorry for them, and yell at that evil black community for mistreating ‘one of their own’.

Right now the president of the United States is using the formula.

He ran a campaign where he brutally insulted every single person he ran against.  But if anyone insults him (in response) they are being mean and unfair. He’s called the media fake news, and questioned their ability to tell the truth. After continually disparaging them he wonders why they don’t say nice things about him.  In other words, he’s the victim here…  There has been so much he could do to put all the questions to rest, but instead he has continually stoked the fire. In spite of all he has done, white victimhood rears its ugly white face.

Sadly we also have a president who cannot spell.

He acts as if none of the things he has done are cause for the way he’s being treated. He’s brushing off these meetings with Russia before he was elected.  President Orange endangered national security sharing confidential information with Russia in a closed door session that only allowed Russian press. If there is nothing to hide, why not allow the US press in as well?  We are all still awaiting his tax returns, which will tell us if he’s in Russia’s pocket financially. For him not to be compromised, he’s doing a terrible job of making us think otherwise.

If that wasn’t enough, most recently 45 has allowed representatives from Turkey to come on our soil and beat up our citizens.

The problem with white victimhood is white people fully support it. In spite of this formula playing out time and time again, other whites pretend and play along. They do this because they also want to use this formula themselves. There seems to be a silent agreement in place. For example in response to his Tweet, alleging Trump fired James Comey for not finding leaks (only to change that story hours later) there are several white people defending their man!

This white lady excused his leaking information as being a ‘typical man’.  Echoing when pussy grabbing was also endorsed as just boys being boys. Most white people found fault with the media for releasing the tape!

I have a feeling the liberal Dems are going to regret this. Im going to enjoy the show. Keep MAGA Mr. President !

You’ll see this pattern happen with police officers who murder unarmed black citizens too. If they invoke the white victimhood clause, white people will defend them throwing all facts aside. When I have written about how white people are the only ones that can end racism, it starts right here. They have to stop enabling white victimhood by pretending their person didn’t start shit. White people have to quit pretending it’s okay for a white person to throw a punch, but not okay for the ‘actual victim’ to punch back.

Currently our nation is nowhere near that point.

This is an age old practice in this nation. White victimhood helps recruit members for the KKK. They feel they’re being shut out of a nation they sought to shut others out of first.  Many whites irrationally fear that if blacks get too powerful, blacks will do the same to them as they have done to black people. Naturally fearing that you will become a victim of what you created and have made no efforts to end, is classic white victimhood. This same idea fueled the Holocaust as well.  Just something to keep in mind.

(*update, 10/14/19 –) Sadly, once again this ‘formula’ has been used to help Amber Gugyer, the police officer who murdered Botham Jean, get just 10 years in prison. We all know this means she’ll serve less than that, but also odd behavior was exhibited by the judge. She came out of the bench, hugged Amber, and gave her a bible. We have never seen this done in the courts of ‘law’. No black defendant, sentenced to jail for murder gets a ‘hug’ from the judge.  But, Amber painted herself, as the victim, even though it was her, who committed murder! We all have to stop falling for this bullshit ploy, to build a better society.