You know … it’s a real shame but we all know what is coming. They can’t go and fire him right away because it’s going to be too Obvious and it might even cause a stir – ESPN is going to look bad either way it seems; BUT they set it up; They actually asked Chris for His Opinion … ironically, after he had already spoke about how most people are not going to be able to speak openly and honestly about Their beliefs on this issue. 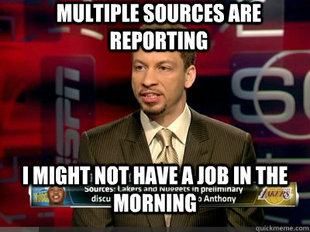 Many good points are raised which often, the gay community likes to overlook – such as athletes being Comfortable with a gay player in the locker-room. Men are naked, half naked, exposed in the locker-room; it’s like being in a private area where you really do not want someone who is sexually attracted to your body parts, to be. The entire idea of men being able to be ‘comfortable’ in a locker-room is that no other man is actually turned on, by what they are seeing.

It’s clear that things are changing in our society, and this is becoming accepted – in a Political Way at least.

I do like what LZ Granderson says in this Interview – that he does not want to strangle the conversation; and it’s my hope that OTHERS in the gay community will follow LZ’s lead. So, after watching Both sides here express the importance of allowing people to speak their mind on these issues —- and soon as Chris Does …. he gets bashed.

Here’s the thing though; When we see/hear this story reported on the news, We only see the part where Chris Broussard is making a statement calling it a sin and stating his personal beliefs; we don’t hear his entire comment. We don’t see that he acknowledges that not everyone is going to agree with his personal opinions, and that he has a good relationship with the Other reporter who is gay.

I have not seen any “new content” From Chris Broussard on ESPN’s website. I hope that is not a sign – we need to allow the conversation to take place and not use the power of the microphone to determine who’s message gets broadcasts, vs who’s gets ‘tuned out’ –

(update from Oct 12, 2019 :: Chris Broussard did end up getting fired from ESPN and now works for  Fox Sports)