Out the gate, these are a Few thoughts on the Ryan Cooglar Bank fiasco…  The director of Marvel’s Black Panther, was arrested at a Bank of America, back in January.  You’ll come to see that I do not feel this  is a ‘bank of America’ problem. This is a people in society problem, compounded by incompetent police problems. Joe Biden, recently slapped Black voters in the face, declaring what police need, is not less funding but more. He feels they just need better training, which we all know is a cop out.  (if the pun fits…use it)  Police know how to do their jobs, just most believe that job is to lock black people up whenever possible.

Again, these are just a few thoughts, on Ryan Cooglar at BofA, getting arrested for trying to make a discreet withdrawl.

It’s my number one problem with the police; They’re not into protecting or serving.

They get on mf EGO trips; when Cooglar told the police officer, ‘black man to black man’ — the EGO of the sellout Cop (cause most black police are indeed SELLOUT Bobs) – got the best of him.

NOW he had to prove that all that black man to black man stuff is nonsense; and show HIM who’s day was gonna be bad. ‘Since’ this officer was Black, he most likely DOES get fired ……. only white police are allowed to screw up and remain on the force – 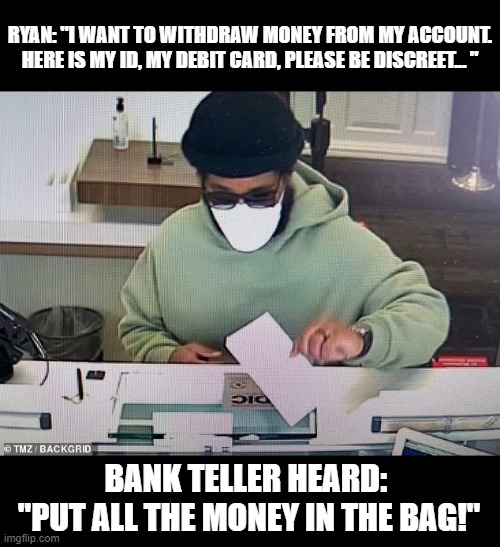 Summing up the first two parts of my thoughts on this whole Ryan Cooglar Bank Robber fiasco, our society has a comprehension problem.  The 911 call from this bank teller was released, and it does not sound good. It sounds like she’s not a very bright person, which is sad cause of how common it is. Lots of people, are barely hanging on out here, but somehow, are.  Prime example of just how ‘common’, common sense is – which people say is not common.  I argue however, that common sense is the most basic sense there is – everyone is in a hurry. Even the people who’s ‘job’ it is, to take their time.  Like so many in our society today, this bank teller judged Ryan Coogler on his appearance.

Then, ignoring that she was handed his debit card, and ID, her initial feeling just had to be right. She already decided, this is a stick up.

People get ideas in their heads, and nothing they see will let them let go of those ideas. Evidence be damned!

I’m still waiting for the people who said 5g was causing coronavirus to issue a retraction. That day, may never arrive.  Recently, Chris Brown proved that a woman accusing him of rape was lying, with evidence of her text messages.   Still, the people who wanted to believe Chris Brown raped that woman, found a way to see fault in him, anyways.  That is sadly, the kind of society we are in right now.

You can’t tell a Trump supporter that the 2020 election wasn’t stolen. They believe that shit like a suicide bomber believes 72 virgins are awaiting them in the afterlife. There was a time when people who’s beliefs were that irrational, were made fun of, but it’s gotten commonplace. Everybody has, ‘their version’ of 72 virgins….

This is a huge problem, compounded by Incompetent Police.

The 911 operator (in the video at the very bottom of the page) clearly has more sense than the police officers who showed up.  Due to the times we are living in, calling the police on black people is so beyond dangerous. Situations like these can, and sadly often do go wrong – quickly!  Thankfully we are able to discuss this nonsense that happened to Ryan Cooglar, and he’s still with us, in the living. These were incompetent police officers but, ‘at least‘, they were not trigger happy racist white police.

Ryan Cooglar mostly became famous for directing Fruitvale Station. A film, about those kinds of police officers, who’s whiteness allows them to get away, with murder.

The misconduct that goes on with so many police departments around the nation, absolutely comes off as purposeful. Such a long history, and so much evidence uncovered tells me so.  Meanwhile, there is even more that is often covered up, misreported – never sees the light of day.  That too, is how it’s always been.

Black police officers however, are rarely extended all of the same privileges. You’d think more of us would know this by now. Most black people place loyalty to the white mans job, over loyalty to black people.  Just as white officers will ‘tune out’ what a black suspect is saying, while in custody, many black police offers do the same. This, is clearly what they are ‘trained‘ to do.  One of several cogs in the wheel, of the prison pipeline, that often pumps in innocent black men, arrested over mix ups and misunderstandings.

Most black men don’t have Marvel Studios Lawyers at call, ready to handle those mix ups on their behalf.

Also, most likely, this black officer and his partner will be fired.  I’m not sure if the partner is also black, if he isn’t, that ‘may’ save his job.  The black guy is done though …