The original term is Silent Majority and that is where we begin. There is a false narrative in our country, that racist white people aren’t the majority. That premise is usually built upon the argument that because we do not hear or see evidence of racism that it must not be there. Even when evidence is presented, it’s often argued down as inadmissible, conjecture, or misinterpretation. It’s called ‘playing the race card’ or ‘race baiting‘ or ‘bringing race into this’; it’s truth is accused of being the false narrative, by the originators of false narrative.  Only when someone is obvious like Donald Sterling, who was recorded while being racist, do white people ‘believe’ that a white person is a racist.

In spite of there being years of reports about Sterling, the false narrative trumps everything.

This narrative that racist white people aren’t the majority is found everywhere. When most white people talk about the KKK They’ll say their numbers are declining. They’ll say the KKK aren’t that big of a threat – and that is a false narrative that began in the late 1970’s. This was when David Duke took the lead and was seeking to change the public perception of the Klan.  Using false narratives is an old tactic of theirs that has been around for centuries now.

Racist white people have been the Majority in this nation since it’s inception. For centuries they were the Openly Loud Majority, but then the Civil War happened. In spite of losing that war, racism continued to be a prevalent issue. Jim Crow laws and segregation was endorsed by the silent Majority of the land.  No one really ‘did anything’ about it. Racist white people were openly racist in the South, and often in other parts of the nation. Murders, rapes, lynching and falsely imprisoned were the routine for blacks living in the south & around the nation following slavery.  It wasn’t until the Civil Rights movement that ‘laws’ began to change, making it illegal to be Openly racist.

However as one false narrative seemingly came to a close, another one began.

You see, there have been people covering this topic as far back as the 1800’s. You’ll find in news paper reports, several cases where whites stated that racism wasn’t an issue. During slavery many whites openly stated their beliefs that blacks enjoyed being slaves. They referred to their evil hateful racist ways as, just a way of life. Some even called it the ‘natural order of things’. They saw nothing wrong with it and taught this mentality to their children.

In a nutshell, this is the root of white culture. The white ‘tree’ has given us a race of people who absolutely, for the most part are racist as fuck!

I’d venture to say it is because several are taught from a young age, a complete and total lie about their own ancestry.

White people are taught to view demonic men and women, who stole land, raped men and women broke families apart and worse as Heroes. They descend from actual murderers, killers, and thugs, but are taught to only see the good in those ancestors not the bad. This entire nation was built upon the backs of others, and even when that ‘peculiar institution’ was outlawed, a Prison Industry rose up in it’s place. White people are taught from birth that blacks commit more crime and therefore those Prisons are needed. It’s the same lie that was told during slavery, when whites were lied to, and told that blacks were violent and needed to be chained.

New laws (black codes) were created to ensure that blacks would remain at the ‘bottom’ of this society. Whites, living under the paradigm that blacks are dangerous have easily bought the lie sold to them, that these laws have been just.

That’s how dangerous this false narrative is.

The civil unrest that continued during and after slavery is what ‘slowly’ brought the white race to the point of creating a new lie. This lie, would openly deny the reality that all others were experiencing. It was a lie that would allow them the ‘white privilege’ that is so commonly spoken of today. That privilege has always been a core part of being an American, when you’re white. If anything, this white privilege ‘is’ the very legacy that they have sought to pass from one generation, to the next.

This is what they’re seeking to protect. Terms like ‘diversity’ and ‘equality’ mean others will get a piece of their pie. The false narrative of White Victimhood is now, a thing.

You will hear several white people tell you the “silent majority” has nothing to do with race. Of course right?

I think, that if we are ever going to overcome that evil hate, this is where it begins. It’s a difficult task, because a lot comes with white privilege. Asking white people to undo all of that, is a major undertaking. So many awesome things come with it.  I totally can understand why so many have continued to object to any notion, that ‘they’ are responsible for ‘anything’.

Especially since most of them were told that from the day they were born. Several people who follow a specific religion as adults, were brought up in that religion as a child. Very few of us, seek out new religions to believe in, and this includes those without a religion at all. So much of how we are raised impacts our decisions as we grow through life. There are people who reject any notion of a god, a creator, or higher more divine power, simply because their saved and sanctified mother, father, aunts and uncles are the worst examples.

This happens with ‘some’ white people as well, who are raised by evil racist white people.

They too are taught all of the hate filled ideas, by all of those around them but ‘some’ of them reject those ideas because of who those people are.  Unfortunately, most people raised in those environments, take on those belief systems as ‘truth’.  Just as is the case with people raised in religious houses, or gang environments. People usually become their surroundings.

Part of living in that sort of truth, includes lying and or covering up for those you love. Perhaps you reject the ideas personally but, never say anything to those around you who are adamant.  Not everyone who goes to church every week jumps and shouts, with the rest of the congregation. I would even venture to say, not everyone in the pew believes what the preacher is saying either. I share all of that to come back to my initial point. Racist white people ARE the majority – most are just ‘silent’.  At least most of them were silent … 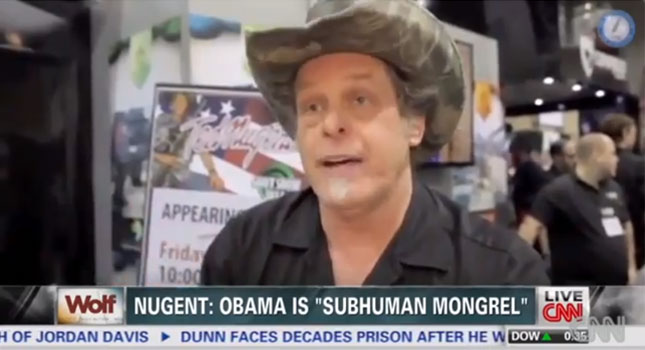 Having a Black President brought a lot of them back out again. (Racism is Alive and Well: 35 Incredibly Racist Anti-Obama Images)

Because racist white people are the majority, and they do not believe in ‘race mixing’.  If you’ll recall that is what Donald Sterling was most upset about. That his secret black girlfriend was publicly posting photos of her self with black guys.  Taking photos with black people is an offense inside white culture.  That relationship has to be explained or else it could jeopardize a white person’s status within the white community.  If the black person isn’t a co-worker, an employee, or someone famous it could be problems for that white person!

We got a chance to hear that anger on Sterlings’ recorded conversation but it’s more common than white people will acknowledge.

(the original interview has been Scrubbed from YouTube; possibly an effort by whites who work there to keep this truth from being exposed)

I never forgot when this happened because it was so typical of what always happens. His racist rant was reduced to oh, just a mistake that happened out of the blue. The harmful behavior, and comments like back in the day you would’ve been hung were all downplayed.  To this day, I refuse to watch Seinfeld or anything he’s attached to, because of how he covered for his boy.

Occasionally they’ll admit that a few white people they know are racist. But usually it’s followed with “Oh that’s just Bob, Jim, Tony, Joe, Billy, Greg, or whatever….” – rarely will they also admit to how racist Jenny, Becky, Amber, Rose, Kimberly, and Astrid are. Protecting white women is the name of the game. She in turn protects her white king. This game of racism truly is a game of Chess …. not checkers.

The white queen rules the board.

Her white king is simply carrying out her wishes.  While she has free reign of the board to do as she pleases. Knights, Rooks, Pawns and Bishops all moving in unison against any opposition. In this hypothetical game of chess, they’ve seen to it that they know all of the rules. Their opponents are still learning while the game is in process, taking multiple L’s along the way. The game we’re playing is not fair. But the whites are having too much fun winning to concern themselves with others.  Besides, that’s against the rules. The silent majority rules ….